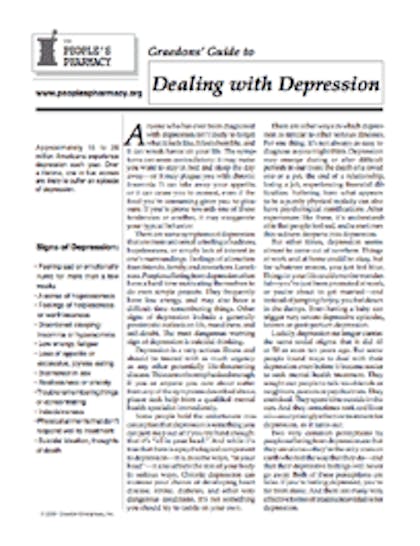 Read up on the pros and cons of popular antidepressants, along with advice on getting off drugs like Cymbalta, Effexor or Paxil; the connection between antidepressants and suicide, and Non-drug approaches.

This digital health guide offers a summary of the signs and symptoms of depression, so you can judge if you should seek help. It also covers the pros and cons of popular antidepressants. How well do they compare to placebo treatments?

Get advice on how to discontinue drugs like Cymbalta, Effexor or Paxil that can trigger unpleasant or intolerable withdrawal symptoms if they are stopped suddenly.

What is the connection between antidepressants and suicide? The guide describes warning signs for this danger.

Learn about non-drug approaches to beating back the blues, and what to do if drugs don’t work.