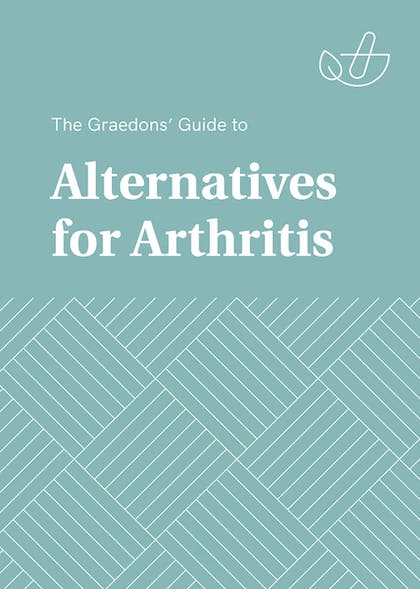 This 100+ page book provides information on a variety of herbal and home remedy-base treatment options for Arthritis. Are there safer options than NSAIDs?

Do you ever experience a twinge in your knee, shoulder, hip or hand? Tens of millions of people suffer with osteoarthritis (OA).

Many of them use over-the-counter pain relievers such as ibuprofen or naproxen to ease stiffness and reduce discomfort. Some people cannot function without a daily dose of such NSAIDs (nonsteroidal anti-inflammatory drugs).

So, we created an online resource to help people manage joint pain and stiffness without powerful drugs such as steroids like prednisone or NSAIDs such as diclofenac, ibuprofen, meloxicam or naproxen. Such drugs can have serious and sometimes even life-threatening side effects.

Here is a comment on NSAIDs from a reader, Carl, a physician in Charlottesville, VA:

“I am a physician in practice for 35 years. I take 400 of ibuprofen every morning for my mild low back pain. I am otherwise healthy. 400 mg is a modest dose. I have been doing it for a decade (no GI problems).

“Contrary to the recently published evidence on NSAIDs in back pain, it helps a little bit (which is all I really want). I am sure that that getting up and moving is what really helps. I occasionally (every 1-4 wks) take another 200 or 400 mg for different aches or pain (after running 10 miles). If I take more, I notice that nicked skins bleeds a little longer.”

But are NSAIDs a Deal with the Devil?

Many people can take NSAIDs for a few days or even a week or two without getting into trouble. But people with osteoarthritis deal with inflammation and chronic pain that lasts for months and years.

There are serious problems associated with regular use of NSAIDs (whether they are OTC like ibuprofen and naproxen or prescription like celecoxib, diclofenac or meloxicam).

These drugs can cause potentially serious side effects. Most people are aware of problems like heartburn, stomach pain and even bleeding ulcers. Other adverse reactions include high blood pressure, heart attacks and strokes. Then there is fluid retention, kidney and liver damage, irregular heart rhythms (AFib), heart failure, cardiac arrest and blood disorders. Toxic skin rashes can also occur. These hazards seem abstract and irrelevant to most people.

After all, OTC drugs are supposed to be super safe.

And while many people assume adverse reactions would never happen to them, here are just a few of the reports we have received from visitors to this website:

“I took NSAIDs for several years due to chronic low back pain. Later in that period of time I started to develop skin lesions on my face. These were absolutely horrible, everything from bleeding pimple-like sores to open ulcers that would not heal.

“I went to about five different dermatologists, plastic surgeons and GP’s during that time. All were mystified. Yes, I filled out my history accurately but no one drew a connection between NSAID use and skin lesions.

“Then one day I did a search which triggered the association. Do your own search: ‘NSAIDS and skin lesions.’ It’s right there, although a rash is more commonly mentioned than lesions. Most people with this issue get them on their hands and arms, but I got them on my face.

“Ten days after withdrawing from NSAID use entirely, my skin had cleared. The one GP I ultimately talked to about this afterwards confirmed the diagnosis and noted that he had seen this in the literature but forgotten about it.”

“My brother took diclofenac for 6 months. Previously he had a full check up, including kidneys. They were fine. His doctor prescribed the drug with no advice. There was no warning relating to kidneys on the paperwork that came with the drug. After 6 months of diclofenac his kidney function had been reduced to 25%.”

“I had to stop regular use of naproxen because of kidney damage. After 40 years of practice in orthopedic surgery I had to stop what I thought was ‘Safe'”!

Barb in Idaho has a tragic story:

When someone dies after taking a medication we have heard this response: “He was old and sick and would have died anyway.” Most people do not make a connection between a medication and an unexpected death.

Go back and read the FDA’s warning to physicians about NSAIDs.

Mary shared this story about her mother and her mother-in-law:

“Both my mother-in law and my mother almost died from ibuprofen. I told the ambulance drivers I thought my mom was bleeding internally. She was, and almost died.”

If a dietary supplement or herb caused ANY of the side effects listed for NSAIDs, the FDA and the media would be up in arms.

Imagine if there were data demonstrating that curcumin, the active ingredient in turmeric, were discovered to cause high blood pressure, atrial fibrillation and heart attacks.

The FDA would demand it be banned immediately.

Obviously, there is a double standard when it comes to NSAIDs.

What can people do when they face a challenging trade off between pain relief on the one hand and side effects like bleeding ulcers or kidney damage on the other?

That is the reason we wrote The Graedons’ Guide to Alternatives for Arthritis. In fact since we released the completely-updated-for-2017 edition this summer, our readers have been raving about the electronic guide, but also pleading for a version “with an index they can thumb through and dog ear.”

So we spent several months re-designing the layout for print, working with a publisher and printer here in North Carolina to bring this must-have guide to your fingertips.

Here is what C.J. in Danville, VA has to say about the electronic version of Alternatives for Arthritis:

“Why isn’t your Guide to Arthritis required reading for all medical students and adults everywhere?

“There is more common sense in these 119 pages than I’ve found anywhere else. Just finished reading it and am blown away at the concise collection of data available of a comparison of drugs to nutritional supplements in alleviating the suffering of the largest segment of society, those over age 50, from arthritis. It all leads back to your first book explaining the growth of the drug industry and how the FDA is kept in check by it.

“Well done, good and faithful servants. You offer a forum for the voices of medical pros that do not sleep with the drug manufacturers. Sorry for the bluntness, but that’s just the fact.”

What you will learn in Alternatives for Arthritis:

This 104-page handy book provides insights on home remedies like gin-soaked raisins, Knox Gelatine and Certo and Grape Juice. In addition, there is information on food remedies such as juice and vinegar, pineapple or tart cherries.

There are also details about non-drug anti-inflammatory herbs like Ashwagandha, Boswellia, Turmeric, Ginger and Stinging Nettle. How good is the evidence that acupuncture, MSM or SAMe can be helpful for arthritis? Get the answers in this practical book. Learn about natural approaches that can help without causing the devastating dangers of arthritis drugs.

So don’t wait – Get your print copy of Alternatives for Arthritis today!